by A Couple Cooks

Alex and I were born in the 1980’s; we were those 8-year-olds who planted trees for Earth Day and worried about alternative fuel sources. But it wasn’t until adulthood that we realized that the food we eat can also affect the Earth–in both positive and negative ways. Today we’re foodies who typically wouldn’t be caught dead making a dish with out of season, non-local tomatoes. We stand in support of our local farmers and against out-of-season, tasteless big-box store tomatoes. However, at the same time: we realize that in order to feed our world, we need diversity in food growing practices. As idealistic as it sounds, we’re not going to feed the world with 100% local veggie farmers. 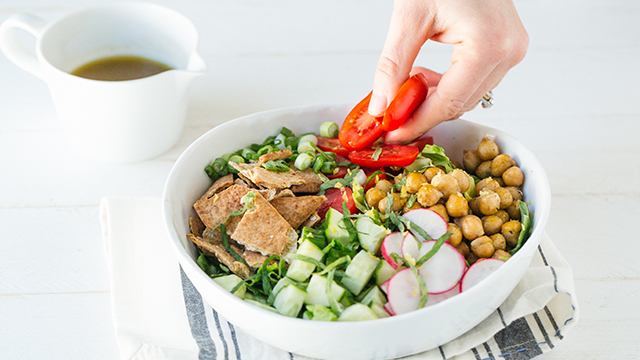 It’s estimated that by 2050 we’ll have an additional 2 billion people in this world, and to feed them we’ll need to double the amount of crops we grow. To make that happen, Alex and I believe that organizations of all kinds are going to have to lean and green up their growing practices: from small and local farmers to large and national businesses. 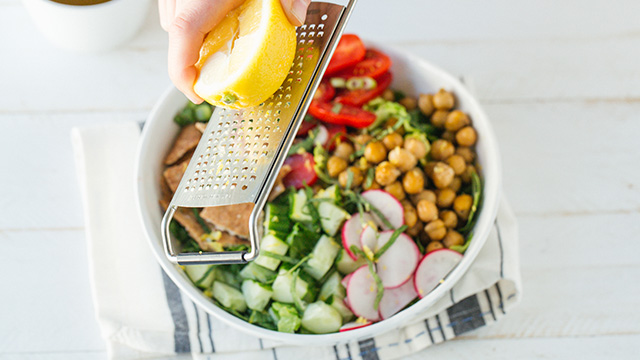 To celebrate Earth Day this year, we’ve teamed up with Village Farms to create a recipe with their greenhouse-grown tomatoes. Yes, we’re all about local, soil-grown summer tomatoes. At the same time, growing tomatoes using hydroponics (growing in water) in a greenhouse allows for the season to be extended. And using sustainable growing practices and avoiding chemicals makes Village Farms a viable option for fresh produce year round. A couple points that stuck out to us about Village Farms’ practices:

To celebrate Earth Day, we’ve created this chickpea fattoush bowl featuring Heavenly Villagio Marzano®. Fattoush is a Lebanese salad that’s a mix of herbs, cucumber, tomatoes, and crispy pita pieces, brightened with the flavor of sumac, a traditional spice. This recipe is a nourish bowl inspired by the concept of fattoush; we’ve added spiced chickpeas to make it more filling. Since sumac is a unique spice, we’ve used lemon zest here to mimic its tart flavor–but if you prefer to be authentic, you can find it online! We tried it with both sumac and lemon zest, and enjoyed it both ways. We hope you’ll enjoy the recipe — and would love to hear your thoughts on feeding the world!

This post and recipe were created exclusively for Village Farms and originally appeared on A Couple Cooks.