Mike DeGiglio, president and chief executive officer at Village Farms International, spoke with Urban Ag News about his company’s approach to technology and how it’s using it to be more efficient and profitable.

When was Village Farms started and how has it expanded in size?

How has the use of technology evolved at Village Farms?

For the first 20 or so years, Village Farms worked off of existing European technology that was mostly used in Dutch greenhouses. Holland was considered the Mecca of greenhouse technology. And most companies worldwide looked to the Dutch when it came to higher technology. But that changed. It changed as greenhouses internationally began to quantify the tools to work in a wide variation of climates. The Dutch technology was geared more for the climate in Holland, where it never really gets hot. It’s a temperate climate with low light levels. Village Farms eventually saw the need to develop its own technology. That is easier said than done. If a company is going to spend millions of dollars on R&D, it has to be big enough to sustain it. Even though Village Farms is successful in this endeavor, it was only achieved after 25 years in business and it could afford the costs once critical mass had been achieved to allow further expansion to build projects that cost millions of dollars. For someone just starting out that is extremely hard to do. Most greenhouse growers use existing technology. Village Farms didn’t go that way. It developed its own. The company wanted to be able to have the intellectual property in creating greenhouse growing environments that can mimic the exact climate it wanted based on the crops it would grow and then locate those in areas it wanted to be in for market reasons. If this was left up to a technology company, it might not necessarily be focused on that. Village Farms is unique in that it developed its own technology as compared to most other companies that work with existing technology.

In what technology areas has Village Farms invested?

Most of Village Farms’ technology is in software design to control the internal environment of the greenhouse. The company has done a lot with growing technology, both on the production and packing lines. When it comes to growing media, irrigation systems, etc., the company looked at these various components, but production is not where it spent most of its money. The bulk of the money was spent to create a greenhouse climate that is workable regardless of where the footprint is. Our goal was to create the software to be able to run a very sophisticated greenhouse that could have conditions very conducive to plant growth regardless of what it is doing outside. If you can accomplish that, then you can put the greenhouses not where it is best for the plants, but where it is best for the market to lower freight costs and increase access to labor. You can be more sustainable and you can increase product shelf life and product quality.

What are some of the other areas of technology in which Village Farms is looking to invest?

Additional technology for the company could come on the energy side and supplementing carbon dioxide. If we can reduce energy costs, we would be much more sustainable. Village Farms has invested with Quadrogen Power Systems, FuelCell Energy and the National Research Council of Canada to build a pilot project for fuel cell technology for our greenhouse in British Columbia. Also, our new Permian Basin facility derives all of its electrical needs exclusively from wind power. A second area we are looking at is cleaning up landfill methane gas. Village Farms acquired Maxim Power, a co-generation facility adjacent to our greenhouse facility in British Columbia. The next phase, which we are working on with the Canadian government, Hallbar Consulting and the Swedish Institute of Agricultural and Environmental Engineering, is to fund a study on the capturing carbon dioxide from landfill gas. There are hundreds of thousands of metric tons of carbon dioxide flowing out of landfills every day. Our goal is to find the technology to clean the carbon dioxide so that we can use it in our growing processes. If we can use the potential of the carbon dioxide sequestered in the landfill, clean it and then use it in the growing process, we will reduce our costs and help clean the environment. The benefit is to lower our production costs. We won’t have to burn natural gas to produce carbon dioxide and we won’t have to buy carbon dioxide. We will also be reducing the amount of carbon dioxide released into the atmosphere. 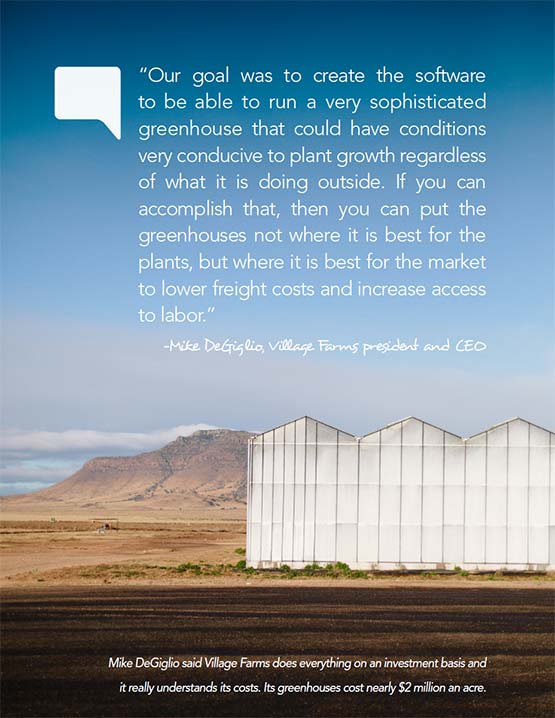 What advice would you offer U.S. greenhouse growers of edible crops when it comes to making technology investments in their companies?

I would have to ask what is the crop and how do you compete? If you have the right crop, then I would ask what are the big issues? There currently is a big labor shortage in agriculture. Using technology to mitigate labor shortage issues, then I think a grower can move forward. As more crops are being looked at for indoor production, for example berries, then you know you are going to have to have production systems that can mitigate labor even to the point of incorporating some robotics. The use of robotics may also expand to packaging and shipping as well as harvesting and other tasks in the greenhouse. Technology could play a role in berry picking in the greenhouse and in the field. Last year growers left a lot of berries in the field because of the shortage of labor. The use of migrant labor to go from berry farm to berry farm, which is seasonal outdoors, is becoming much more difficult.

What crops are Village Farms now producing and do you expect that to change much over the next five years?

We are always looking at different varieties of our core products, including tomatoes, cucumbers and eggplant, of which we have multiple colors. We are always looking at unique varieties of our core products. We launched our unique and exclusive Heavenly Villagio Marzano® tomato variety about two years ago. We have a whole pipeline of new varieties. We continue to diversify. Berries are definitely on our radar screen. Nutraceuticals and some unique medicinals have a future. Some of the nutraceuticals are plants that have a medicinal benefit. Some of these will have to be produced in conjunction with the pharmaceutical companies. For a pharmaceutical company to sell something it has to be patentable or else it won’t be interested. We are always looking for unique, higher value products that are difficult to grow in the field due to climate or labor or not being available year round. Our focus is on increasing value for our customers by not compromising on food safety, using IPM, and consistent quality that help us provide the best products for consumers. 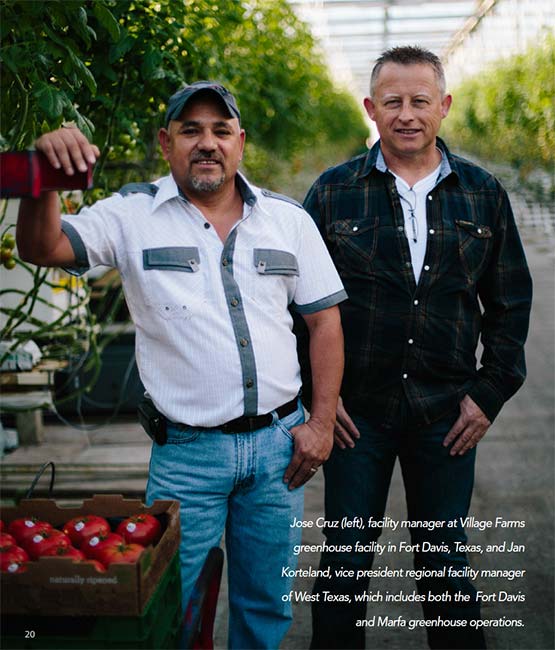 What do you think about the increased interest in vertical farming?

Vertical farming is still in the R&D phase. There is a PR value. The capital and operating costs are huge. It’s limited on the size so how do you reach critical mass? It’s not large scale agriculture. Village Farms does everything on an investment basis. We really understand our costs. Our greenhouses cost nearly $2 million an acre. A lot of these vertical farm operations can’t grow long term crops, at least not now. Vertical farms have a place for crops like leafy greens. Any crop that can be turned quickly in 28-30 days like leafy greens could potentially be grown in a vertical farm. Looking at the lettuce industry, most of the product is grown and shipped from California to the East Coast. If those crops can be grown regionally or locally and bagged here instead, the carbon footprint for shipping the product is reduced or eliminated. On the other hand, you have to be cost effective. How are these vertical farms going to compete with field-grown product long term? You can always find niche markets where people are willing to pay a premium for locally produced. When you make those kinds of large investments you have to be sure it is sustainable. And more importantly, that the profit is sustainable in the long term. Growing food for human consumption carries a huge responsibility along with it, this is something we have never taken lightly, and is the key driver in how we do business and measure efficiency.

David Kuack is a freelance technical writer in Fort Worth, Texas; dkuack@gmail.com.